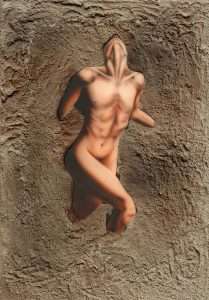 “Idea Forma Alterità” was created by Giampiero Abate on the occasion of an exhibition whose concept was centered on inspiration.
Preparing this project and having to choose the works to be exhibited, the two fundamental subjects of that work came to mind: man, in the most stately aseptic expression of a body beyond formal considerations of gender, and matter inanimate, represented by a compound of cement and sand. Inspiration, therefore, originates from the relationship between the existential condition and the matter that man transforms, but of which he somehow feels a part.
In the artistic act, that is to say that intimate and inner journey through which the idea is objectified, matter is the primordial space within which the form is elaborated; but if it is the matter that allows the alterity of the intuition from the creative mind, it is the human work that identifies that idea in the matter. In the process of transformation, the existential essence of the artist is expressed, who applies an irreversible choice by forcing the material into an a priori form, effectively giving a destiny to what could potentially have become anything else. Despite the irreversible alteration that human work applies, any artistic production maintains a slight, yet intuitive reflection of what the material could have originally become if the creator of the metamorphosis had preferred a different one of the infinite possibilities of transforming it.
The choice that the artist applies by altering the material is due to his own sensitivity, so there is a sort of predetermination based on which it is the raw substance that guides the choice of the metamorphosis that will irreversibly change it.
The art object, therefore, is the point of union between human intuition and the expressive potential of the materials at the origin: in this syncytial relationship between man and matter it is the artist who recognizes in the mass still to be transformed the idea he has a priori of the future art object. On the basis of these premises, the distinction between artist and matter becomes increasingly blurred: all the substances that make up the art object are the concretization of the idea of ​​that object created a priori by human sensitivity, for which matter becomes tangible extension of the mind. The intention of representing man entangled in matter is not in a maieutic act of the artist in front of the raw material, on the contrary in the awareness of being part of it. In the game of recognition between man and matter, an absolutely necessary role is given by work: it is through the “job” of the artist that the idea becomes concrete in one of the many physical contingencies, making it a necessary appearance; for this reason the work is perceived as a medium, not visible but absolutely present, between the background treated so that it appears rough and the human figure, worked with a technique whereby the pictorial film seems almost translucent.

Therefore, having to select the works to be represented in this catalog, which speaks of traditions to be preserved and enriched, the observation that for Abate the inspiration comes from the craft that man applies to transform the material into his ideas appeared to me as interesting. . The artist’s work, however,
it is not made up of intuition alone, it is made up of ancient techniques, worn out instruments … of a tradition that, like an epic song, is learned and handed down nourished by one’s own experience. The artist’s work is very painful: the creative act is an irrepressible need, but unlike the viewer, one cannot feel satisfied by the vision of what has been created. The artist only enjoys the fatigue of his profession.
Any comment is all the more true when you know the object of your reflection in depth: I have known Giampiero for a time that cannot be measured in minutes, but made up of sharing; it is not a gamble to interpret “Idea Forma Alterità” as the most sincere expression of freedom: the freedom to enjoy and suffer for that fury that devours those who have placed the intimate principle of fidelity in Art, those who do not regret easy choices. I remember, who abandons the ship to be stabbed by life, but only after having carried that ship to calm waters. 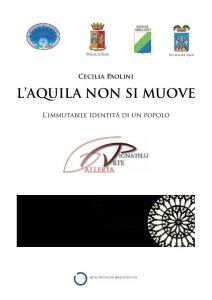