On 10 June 2022 on official site of the Marchionni 2022 Award the official list of the 💥 finalists 💥 has been published and two of my works have been chosen in two sections : 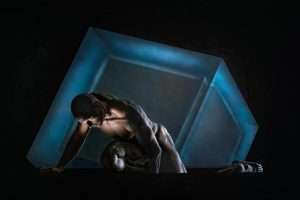 👉 For the Painting , the Jury’s choice fell on Hexaedro ( Ultrareal ). Painted in 2019, acrylic on canvas 150×100 cm.
It is part of the five Platonic solids – the only regular polygons with equivalent edges and vertices that, inscribed in a sphere, have all their vertices on its surface – for an investigation that has its roots in the history of art and science.

Cited by Plato in the Timaeus, studied by Piero della Francesca and Paolo Uccello, analyzed by Luca Pacioli and illustrated by Leonardo da Vinci, the five figures, symbol of the perfection of the universe, become the beating heart of the painting.
Hexahedron as a natural element represents the Earth 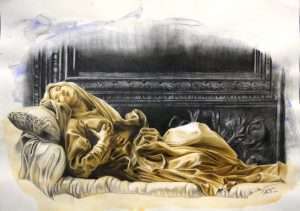 👉 For the section Grafica of the Marchionni 2022 Award, on the other hand, the Jury chose Ecstasy of Beata Ludovica Albertoni , airbrush acrylic and charcoal on paper 70×50 cm from 2015.
This work is a tribute to Gian Lorenzo Bernini and his sculpture preserved in the Altieri chapel in the church of San Francesco a Ripa in Rome.
This work expresses the most incisive religious aspect of the latest productions by Bernini ; the figure of the blessed is lying on a bed finely embroidered in marble and resting on a block of jasper worked as if it were a drapery, which is placed in an unconventional way on the altar of the chapel.
The artists selected for this section are: Cabri, Pretti-Poggi, Del Giudice, Zefferino, Abate, Colazzilli, Muolo, Corridoni, Mollicca-Nardo, Benetazzo, Mascarucci, Suprani, Aleodor-Venturi, Congiu , Brundu, Ottobrini, Fresia, Sgrò, Vargiu