The Ecstasy of Blessed Ludovica Albertoni is a work of Gian Lorenzo Bernini from 1674, kept in the church of San Francesco a Ripa in Rome.

Ludovica Albertoni , Franciscan tertiary who lived in Rome since 1474 in 1533, she was beatified in 1671, also for the experiences of mystical visions, a dimension of transcendence re-evaluated and encouraged by the Roman church in the seventeenth century. In the same year, the Altieri family decided to dedicate an altar to her in the private chapel in San Francesco: the work was entrusted to the now seventy-year-old Bernini .

Located precisely in the Altieri chapel, this work deals with the theme of Christian ecstasy with simpler and more sober forms, already touched upon in the ‘Ecstasy of Saint Teresa of Avila of 1652. It expresses the most incisive religious aspect of Bernini’s latest productions; the figure of the blessed is lying on a bed finely embroidered in marble, which is placed in an unconventional way on the altar of the chapel.

The space of the chapel is very small, but Bernini still manages to create a scenographic effect such as he had already experienced in the Cornaro chapel. He creates two very inclined walls that act as a backdrop to the space where the sarcophagus of the blessed is inserted. The back wall is set back, so Bernini can hide two small vertical windows, which give directly to the outside, creating a grazing lighting that illuminates the white statue making it more visible in the penumbra of the chapel. Entering from the main nave, the whole chapel appears suddenly, in a dense half-light broken only by a ray of light coming from a hidden window; the blessed is ideally elevated thanks to the narrow form of the architectural composition.

A canvas by Giovan Battista Gaulli is the background to the statue of Ludovica Albertoni, deliberately designed so that the two works were in evident contrast: in addition to the obvious difference in materials, the white marble and the darker colors of the painting, there is a strong discord between the ‘convulsive agitation of the reclining figure and the delicate paradisiacal vision behind him, as if the painting were the very vision of the blessed.

After this Wikipedia introduction, I approach the description of my work. 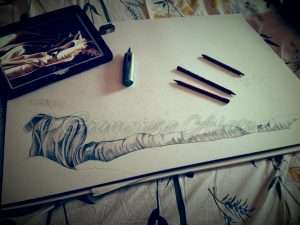 My research of reproduction arises, as my usual, not to limit myself to the hyper-realistic technique aimed at itself, but by blending various artistic tools and techniques.
The paper to start: a sheet of acid-free, non-bleached and rough pure cotton, more suitable for watercolor than for other techniques.
The image I traced with a pencil trying to bring back every little detail. Already from this stage I began to appreciate the splendor of the sculpture.

First I went to design the bed of the Beata with a series of pencils of various softness, at the end of which I colored with watercolor.
For the figure, on the other hand, I chose a sepia tone to have a “monochrome” rendering with white reflections (or highlights).
In the final, the background with charcoal to give more depth, but first I gave a draft of blue with watercolor.
In this way I was able to achieve the right tonal balance between the figure and the background.

I had enjoyed the sculpture before by studying its photos and information on the Internet. Often, being in the world city of art, I don’t realize that we have everything here in Rome. I went to see her in person.

An incredible emotion to see it a few meters away, recognizing every single fold and nuance. An exceptional execution, that of Bernini, placed in a small chapel, almost insignificant, but embellished by this masterpiece. The light that filters from the left that floods the sculpture from the head to distribute itself along the body, as if it were a celestial light.

This work of mine is also available in limited edition of 30 copies in Gilcée print on Hanmenhule Fine Art William Turner 310 gr. in A3 + format, numbered and signed in original, with certificate of authenticity.

This site uses Akismet to reduce spam. Learn how your comment data is processed.